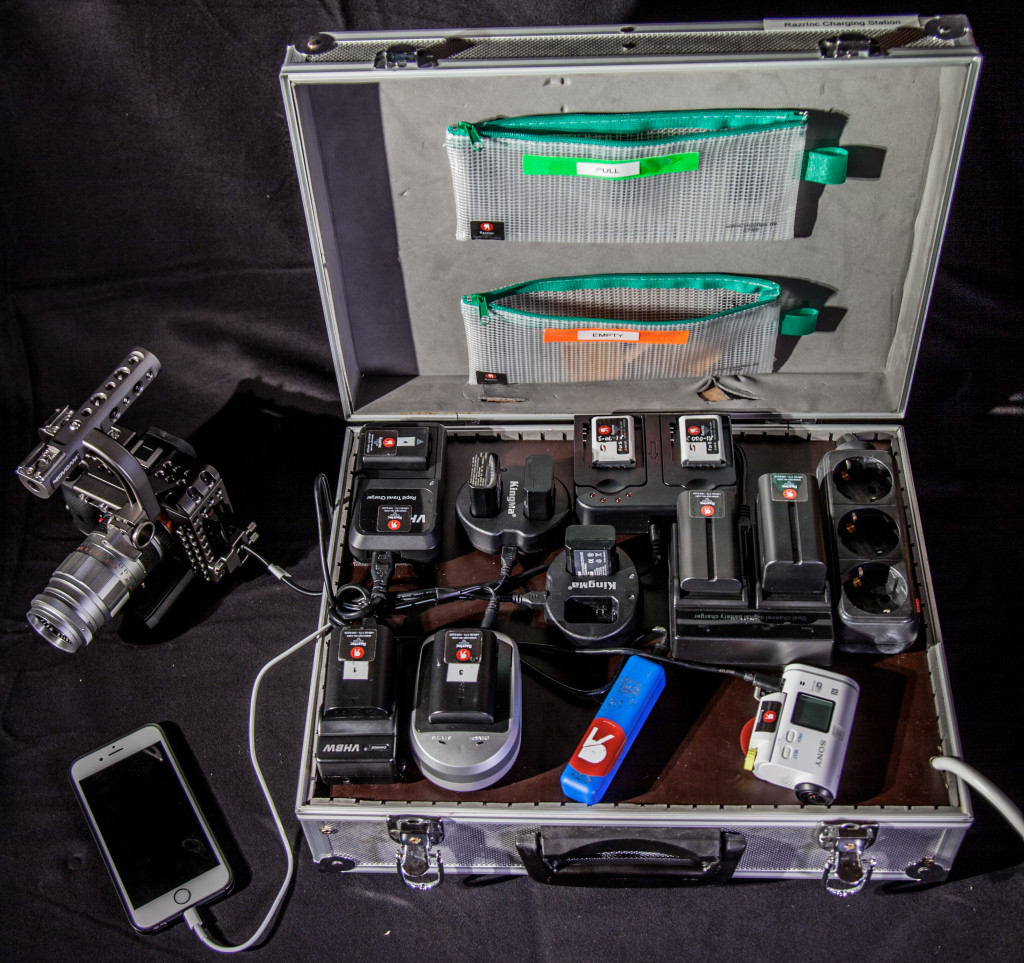 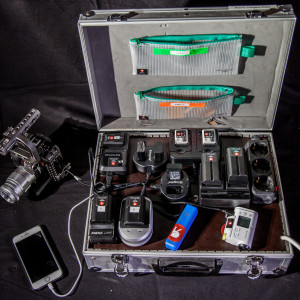 How To Charge 14 Camera Batteries At Once

While having a lot of gear is a nice thing and usually makes filming a lot easier, one thing that constantly bothered me was the charging of batteries. It was always about carrying enough power-strips, the specific chargers, connecting everything, charging the batteries and packing everything. And by now the number of different batteries increased a lot.

So when I was travelling in the US last year, I got so annoyed by the charging ceremony, that I came up with a idea that has been on my todo-list since fall last year.

But since I got back to Europe there was so much work, that I postponed the project for many weeks. But in mid June I finally started with developing something. I didn’t wanted to spend a lot of money on this, so it was about recycling things I already had. I came up with an old tool-case that I didn’t use anymore. After thinking about what exactly I wanted I came up with a basic plan: I looked through some old stuff and found many chargers that would fit into the case as well as a 40W USB charger. I also ended up ordering a couple of cheap chargers from China. At the hardware store I purchased a plywood plate that would fit exactly in the case, some screws and a short log that I could cut into spacers to keep the plate in position. After all I probably spent about 50€.

At first I planned the charger layout on a piece of cardboard. Notice the cardboard prototype in the background

As soon as I was satisfied with the layout, I started positioning the chargers on the plywood and attaching them via velcro. Velcro on the chargers

This way I can always remove a charger easily and take it with me. Velcro on the plywood

The layout came together quite easily. All cables go underneath the surface where they are either plugged into power strips or in the 40W USB charger. The only exception is the seperate Sony A7S charger. After all I think the result is very nice. It’s exactly what I wanted. On case, all my chargers, one plug and I’m good to go.

With this I can charge: The two pouches are attached via velcro as well, that way I can just carry fully charged batteries with me and return the empty ones to the box. I don’t get any heat issues at all. Everything is charging and it’s easy to carry. Probably not ready to fly, but maybe I will create a second version for that purpose.

It’s perfect for all my work, events, regular shoots and even great for the office. I called the whole thing “RazrInc Charging Station 1” – “R CS1”. Subscribe to our RSS Feed
"The Razr's Edge" is a blog run by Sam Straka, founder of RazrInc.

Thanks For Your Message

Thank you for your message. We'll reply as quick as possible!

Um unsere Webseite für Sie optimal zu gestalten und fortlaufend verbessern zu können, verwenden wir Cookies. Durch die weitere Nutzung der Webseite stimmen Sie der Verwendung von Cookies zu. Weitere Informationen zu Cookies erhalten Sie in unserer Datenschutzerklärung.
//
We use cookies to ensure that we give you the best experience on our website. If you continue to use this site we will assume that you are happy with it.